In the world of Christian hip hop, there are many rising stars, T.L Thorne is one of those underground artists

In the world of Christian hip hop, there are many rising stars, T.L Thorne is one of those underground artists, who in his own little way is rewriting the rule-book on God-fearing emcees’ relationship with the secular music game and is ready to blaze a path to widespread acceptance and cultural influence. Sandwiched between streetwise awareness, social consciousness, and worshiping God, T.L Thorne is confident, cocksure and comfortable in his lane. With that said, T.L Thorne’s delivery, flow, lyricism and beat selection are very much on point. He continually raises the bar with each and every release, which is full

Filmed and performed at 25th Street Recording (Oakland, CA), this video mixes the original electronic elements from the original “Shadows” radio version with live, acoustic instruments for a more organic feel. ﻿ “Shadows” by Kevin Toqe,  was inspired by Psalm 91, the state of being found in a safe place where God does the protecting instead of my own self-protection, and I learn a place of contentment in Him. Then, if right now seems like a “mountain” or a “valley” time of life, the real constant becomes simply the protective, consistent, and overshadowing love of God. Finding this kind of

The official video for the song “Keeping My Faith In You”, by Michelle Miller Bell, was was created to encourage those who are disturbed, angry and frustrated because of all the violence in the streets we see daily, and because of the Coronavirus epidemic that has taken so many lives. Be encouraged and keep your faith in God, for He is more than able to sustain you in the midst of all that is going on around you. ﻿ If you enjoyed the video, be sure to leave a like, rating and a comment. Also, if you enjoy listening to

Diva Prime is a multi-talented artist from Mobile, AL. During April 2020, she celebrated her first year anniversary as a new independent artist in the industry. And she couldn’t celebrate it in more appropriate way than with the release of her impacting 6 track project “The Diva in Me”. Diva is the epitome of urban music stands for, as she blends rap, pop and R&B over skittering hip-hop beats. She is insanely talented, and pulls from all different sounds in this project to make it beautiful and uniquely her own. Her lyrics are insane, like she could simply be an

How can anyone not like Damian Sage? He delivers, plain and simple. Each and every time. He is an extremely talented artist, versatile and engaging. From Blues to Rock, to Indie and Alternative sounds, he never misses a beat. A native of New York, Damian Sage is a singer and songwriter based in Los Angeles, CA. On July 27th, he is releasing his new single – “The Hardest Goodbye” – through Dark Spark Music, a label headed by former Guns N Roses manager, and Grammy Award winner, Vicky Hamilton. An artist of integrity and guts, Damian has never sold out 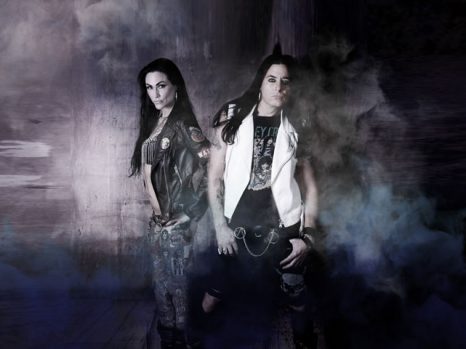 Featuring Jennie Väänänen on vocals and Rob Nasty handling all instruments, QUEENMAKER are a new band from Sweden who are bringing back the glam rock sound of the 80’s with their two-song release “Under the Kiss” on the A-side, and “Hold on to Love” on the flipside. The 80s was the decade in which modern rock and metal was born. Sure, the titans of the 70’s drew up the rules, but virtually every mutated representation that exists today can virtually trace its origins back to the seismic years of the eighties. QUEENMAKER though, don’t bring us the mutated version, they

Quinten Tyvon releases his latest mesmerizing and powerful electronic/pop single ‘All For You.’ The track contains uplifting chords, a groovy beat, and a powerful vocal performance by Quinten Tyvon. The single starts with the atmospheric chord progression and a driving bass line that immediately sets the tone for the rest of the track. The song then proceeds to introduce electronic elements that give the track it’s pop and atmospheric feel. Gluing all of the elements together is Quinten Tyvon’s grand, clean, and infectious vocal. Undoubtedly, ‘All For You’ can take anyone into a musical escapade as it contains every feel-good

﻿ The Black Lives Matter movement is a hard-hitting subject that undeniably deserves a voice through song and protests. 15-year-old Robert Eberle joined forces with fellow musicians Versa the Band & Don Da Menace to create the powerful anthem “Enough” to express their feelings and frustration about police brutality and the mistreatment of people of color. Fans of political hip-hop who are looking to hear a new voice speak out for current events will enjoy this track, featured on most streaming networks with an exclusive video on YouTube. The dynamic blend of emotions and original talent makes “Enough” a track

“Dream On” is the debut single from the new band The Velvet Rocks, based in Munich, Germany. American/Russian singer Dmitry Iogman, Gustavo Castillo Estrada from Mexico and the German/Italian singer Sandro Schmalzl will take you on an unheard of and unexpected ride, combining the genre of rock with classical music. The beauty of their operatic voices unite with rock music and a Queen-like guitar solo in this all-time favorite hit rock song from 1982, originally performed by Nazareth. The Velvet Rocks are produced by the musical genius Christian Lohr. Sandro, Gustavo and Dmitry studied together and started The Velvet Rocks

Rare Phantom is a multi-genre artist from Boston with a particular affection for R&B/Hip-hop. His image and persona draws people’s attention and makes them curious to see what he stands for. However, his message, is to show that one cannot be defined by image alone, and that we need to look a whole lot deeper to understand or judge people. Individuality and self-expression, are keywords in Rare Phantom’s vocabulary, and are values he strives to communicate and pass on to his audience. Currently he is pushing his single, “Blistering Luv” produced by CURTI$Y. Rare Phantom’s blend of straight-talking, blunt content

Home
News
King Piff: “Ear To The Streets EP” – nods to the past and pulls the listener up short with his hardcore flow

King Piff was born in Panama City, and raised in Brooklyn NY, after Piff’s mother decided that their life would be better in the United States. Piff latched on and was fascinated by Hip Hop at a young age. His early influences were KRS-one, Big Daddy Kane, Slick Rick, Rakim, Ice Cube, Kool G Rap, LL. Piff grew up in a very musical home where his mother played the classics 70s Soul, Roberta Flack, Sade and Bob Marley.

A few months ago King Piff, who likes to refer to his style as motion picture rap, dropped his “Ear To The Streets EP”. As a relatively new King Piff listener, I may not be qualified to comment, but as a music lover I’d say that this album is heads above many projects I have heard this year.

King Piff’s intuitive lyrical flow puts him up there with the best of the surrealists – If you think it doesn’t make sense, just listen with your intuitive ears open and the meaning and emotion will penetrate your mind and your heart. Musically, Piff has a great ear as he nods to the past and pulls the listener up short with his hardcore flow. Yet at the same time Piff has the rare ability to make himself vulnerable, by speaking his mind.

Everybody nowadays is too wrapped up with the platinum and ice and all that bull. This is hip hop, this is emceeing, not a damn fashion show. The tracks on the “Ear To The Streets EP”, from start to finish, are perfectly cohesive like the ultimate music score for a movie. It’s one of those rare occasions in hip hop where both the lyrics and beats can captivate a listener. This is a testament to King Piff’s lyrical ability on the mic as well as his ability to really hold his own on a project with only one guest appearance.

“Ear To The Streets EP” is packed with phat beats and rhymes that will knock your socks off. Just listen to tracks such as “Purgatory feat Hostyle Whosane”, “Murder Gang Freestyle” and “KingPiff-Whirlwind”.

This album takes a couple of listens, as King Piff has put out one of those great recordings that make a lot of hip-hop out there sound redundant. But you need to listen closely…then maybe listen again. Piff came with the intention of spitting heat, and has done that throughout the EP. There isn’t one track where I feel, he didn’t give his all lyrically, and that is a very rare thing in today’s rap game, where just about everyone is focusing solely on how they say something as opposed to what they are saying! If you have musical instruments, software or services related to …
February 11, 2014
4 min read