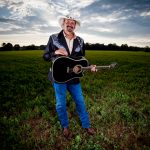 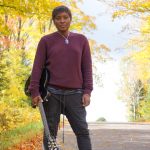 Oliver Clark: “Atomic Thrust” – delivers about as much as anyone can bring !

“Atomic Thrust” is the lead single from the album of the same name, by the velvet-clad, Melbourne-based gentleman, Oliver Clark. Forging a vocal style strongly recalling a mix between the classy but gritty raw power of Tom Jones and the larger than life showmanship of Weird Al Yankovic, Clark delivers a performance that is tongue-in-cheek, ballsy, theatrical and bombastic in exactly the right blend!

Over and above Oliver Clark’s exceptionally engaging over the top video performance, what makes “Atomic Thrust” unique, is the excellent music with its many twists, the unexpected ‘big band’ sounds weaved into the funky rocking rhythms, and that massive voice which propels the song into ear-pulling orbit.

I’ll tell you that one listen to this track is simply not enough…you’ll be hitting replay on your player just to make sure you can believe your ears. Oliver Clark is a truly unique act in modern day music. He brings the razzmatazz of shiny showbiz to cutting edge urban pop and alternative rock. “Atomic Thrust” is not track…it’s an epic show, a full-on musical, all within just over four and a half minutes!

Both the video and the song delivers about as much as anyone can bring as an actor who sings, or a singer who acts; not simply performing a series of cleverly worded lyrics, full of metaphor and simile that hits you in the eyes, but all the depth, meaning and entertainment you’d expect from a top class act. Just listen (or watch) and connect. It’s that simple.

Oliver Clark takes on a journey in which you can block out the world and forget about your problems and just enjoy some amazing music performed with gusto. “Atomic Thrust” is a sweeping musical production with tons of emotion, energy and passion. Oliver Clark’s astonishing ability to express the full depth of the goofy male psyche is the foundation of this track’s impact, and the music drives it home.

2015-09-06
Previous Post: Gecko Theory: “Get Busy Livn’” – rock contained within a melodic framework
Next Post: goldAP’s style and music is trendsetting as he blazes his own path