Gahbaie: “The Bipolar Project” – a rush of inspiration!

Gahbaie formerly known as Cameron Hill is an independent singer-songwriter and multi-instrumentalist originally from Trinidad and Tobago who currently lives in New York City where she is constantly writing new music, performing live shows in the city, and gaining an increasing number of fans. Gahbaie’s latest project is the eleven-track album entitled, “The Bipolar Project”.

It’s no surprise that I discovered Gahbaie. There is something about her singing style and the music production that really sets her apart from the usual divas. Basically she isn’t just another typical Pop-RnB singer. The songs are catchy, full of meaningful lyrics that ‘recollects the digression of a failed love’, a great production and most of all, perfectly unique vocals!

What sets Gahbaie apart is the sheer passion in her vocal delivery, which is insanely hypnotizing on the track “Tears And Rum”. She doesn’t just perform. She feels her words, and she lives them. You can’t say that about many artists nowadays.

“Better Than Us” is where the real music starts and it gets thumping right away over an acoustic soundscape that twists and turns around the melodic vocals. The drum beat and synths give “Feel Me” a futuristic sound, while the way Gahbaie talk sings will catch you right away.

And if you think Gahbaie is yet another name in what is seemingly an endless list of female electro pop singers, with pristine beats, and tight songwriting, listen to the crunchy “2015”, and think again. Yes the beat is pristine, and yes, the songwriting is tight, but the vocals are oh so gorgeous and far-reaching, in the best tradition of outstandingly rare, alternative female singers, such as Sia.

Gahbaie has got this soulful mix of 90’s alternative angst, mixed with airy electro-pop sounds, and lyrics that create some really interesting and vivid imagery. You’ll find this entire blend wrapped up in “Alex Room” ft. ORGonly Mass and the title track, “Bipolar”.

Just as much as the opening track, “Crazy Night” impressed on me, this full-length album is surprisingly, consistently, tirelessly good all the way through. Catchy radio-worthy tracks mixed with substantive, relatable lyrics and an alluring edge.

The edginess stems from her unwittingly bringing sensuality into her music, without it feeling gimmicky or put on for the sake of being provocative. It’s just naturally in her breaking voice and phrasing – listen to “Tears And Rum” for confirming proof of this. Need another example? Then skip to the relentless “Poison”.

The album, set to the failing chapters of a relationship, delivers an innovative pop punch. There are big atmospheric earworms mixed with minimal cutting edge arrangements, all geared towards capturing your undivided attention. Even without Gahbaie’s voice this would be a more-than-worthy album, but with it, it becomes essential.

Gahbaie is really an exceptional artist, who seems to be fully in command of her artistry. I hope she makes the most of every opportunity. She’s a rush of inspiration, and I’ll be interested to see what becomes of her musical career further down the road. 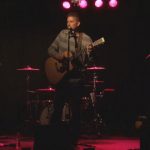