Dylan Lock is a singer/songwriter and multi-instrumentalist who discovered a passion for music at a young age and was instinctively drawn to the sound of the piano. Influenced by icons such as Queen, Burton Cummings, Bob Seger, The Beatles and many other classic rock artists. Dylan describes his music as a combination of blues-rock with an original touch. Currently recording an album, he looks forward to sharing and expressing the same energy he’s embraced through the art of music.

At some point in any pop artist’s career, they’ll eventually find their place in the sun. Sometimes it’s only that fifteen minutes of fame. Other times it’s the beginning of a long and fruitful run of success. I’m not sure which will be true for Dylan Lock. As he is still very much in his own creative process, working his way through a series of somewhat diverse styles of music. Discovering which will finally came together into, what you might call “the Dylan Lock sound”. And he does already have a distinctive sound.

Dylan has a certain flair to him that separates his work from the bunch. Like many groundbreaking artists, his voice, delivery, and exceptional songwriting is one of a kind. His music is a refinement of lush Broadway undertones, sweeping melodies and driving piano rhythms. A kind of Billy Joel meets Maroon 5 on the Las Vegas Strip at noon.

Dylan Lock currently has three singles available on iTunes; “This Girl,” “Don’t Stumble” plus the standout, and my personal favorite, “Killer & The Sin.” While Dylan completes work on his upcoming album, we ran though a selection of his songs on the web. This collection of tunes, features all of Dylan’s strengths: a sure sense of melody and pop song-craft, affecting balladry, nimble piano playing, and dry humor. He crafts songs that are infectiously melodic and consistently refreshing. The terrific, mid-tempo power-pop of “The One,” being a fine example of this.

Whether you’re a fan of more mellow pieces, in-your-face songs or fun numbers, Dylan Lock won’t disappoint. It’s difficult to resist to songs like; “The Chase,” She’s Lost” and “The Saint.”

Dylan is many things: an expressive, virtuoso pianist; a soulful, versatile vocalist and an imaginative arranger. But, above all, he is a songwriter of the highest order. An old-school tune-smith worthy of continuing the progress of a distinct and noble form of artistry known as the singer-songwriter.

Though Dylan Lock continues his musical adventures with his rolling piano lines, complementing adventure-some melodies and heartfelt lyrics, I get the impression that he is none too content to merely fit in with a trend. I expect he will be taking his many melodic changes, his whimsical harmonics, and his utterly creative way of combining lyricism with melody, to the next level pretty soon…quite possibly on the upcoming album!

We shall be ready and waiting. 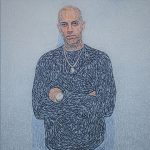