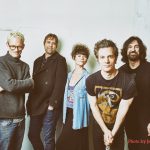 OLDERMOST, at its core, is human and beautiful. The Philadelphia rock five-­piece just completed recording their debut full-­length album I Live Here Now with Jonathan Low from Miner Street Recordings (Daniel Rossen, Sharon Van Etten, Twin Sister, The War on Drugs, The National) in the Fishtown neighborhood of Philadelphia. In April of 2013, the band self-­released a digital 7-­inch introducing the myriad ways their sound has grown since 2010‘sOldermost EP (mixed by Bill Moriarty).

“Close to the Fire” is a powerful, driving song that builds and charges over a unique bed of texture, rock n roll affinity and lyrics that bridge the gap between mystical and real-­talk honesty. “Once I Left” hints at the chamber-­pop elements of the full-­length debut. It profiles the band’s love for classic songwriting, era-blending American rock and layers of strings and vocals. Like the album, it is warm and inviting but complex and exciting. Oldermost’s music comes from a broad, well understood, musical vocabulary. The art of I Live Here Now lies in the carefully considered tonal “words” by which Oldermost has constructed their sentences in a genuine and eloquent way. Clear harmonies and melodic lines work in tandem with the powerfully curious lyrical subject matter.

Without being too overtly experimental in sonic nature, the band seems to stand confidently on the edges of the current musical zeitgeist. At its best, OLDERMOST sincerely connects with the new lost generation, a group whose age perimeters are widening and social statuses are blurring compared to previous generations. Although not depending on story or setting the songs still act as an emotional coming of age story where the music creates a warm place for soulful investigation.

There is a painful mix of helplessness and hopelessness conveyed in I Live Here Now, but it’s less tragic and more akin to a late evening filled with fuzzy over-­disclosure and ever-­changing catharses encircling a table slowly becoming crowded with empty bottles. There’s a healthy blend of itinerant wonderment and discontentment that seems vulnerable to every vibrating rhythm in each moment, image or idea, both ordinary and extraordinary, tragic and ebullient. The sincerity and candidness in the songs seems to have been created for others.

The songs, characterized by sweet, bellowing vocals swimming over a sea of string and vocal harmonies, can be both feral and gentle at any moment, but they are always wholehearted.

I Live Here Now was tracked in Oldermost’s home studio and Miner Street Studios in Philadelphia. The new album which is out now, introduces two new members to the band: Geoff Bucknum, formerly of Free Energy and David Richard.