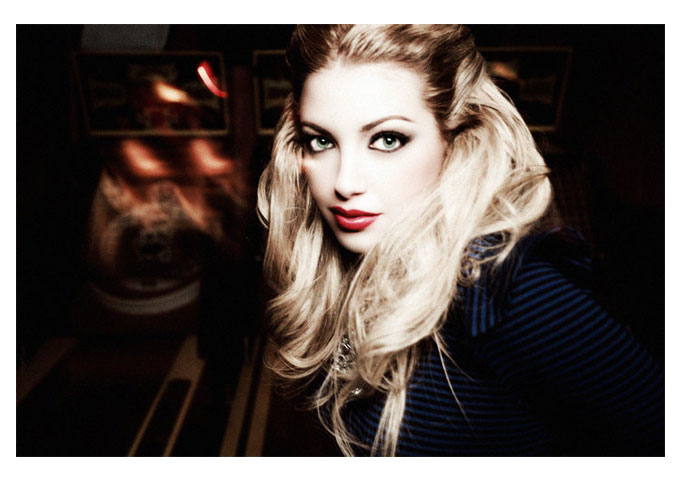 Pop singer and multi-talented entertainer  Dalal has teamed up with Gurl.com   to premiere the lyric video for her empowering pop anthem “Superman.”  Co-written with Nate “Impact” Jolley, the song was originally penned for the documentary  ‘Hair,’ and was nominated for a  Hollywood Music In Media Award  for “Best Song in a Documentary.”  Emphasizing the power of identity and transformation, Dalal explains, “the idea of transformation in the song is not about being someone else, it’s about trying to find ways to be yourself.”  Watch the lyric video for “Superman” HERE

Originally from Austria, Dalal is a singer/songwriter, actress, model and special effects artist.  She is currently residing in Los Angeles, CA, where she is finishing up her debut album.  Her first single, “Taste The Night” debuted in the  Top 10 on the  Billboard Breakout Dance Charts ,  UK Club Charts , and  UK Pop Charts , and peaked at  #26 on the  US Top 40 Charts .  Her last single, “Suddenly” was also nominated for two  Artist in Music Awards (AIMA’s), two  Hollywood Music In Media Awards , and won the  Akademia Music Award for “Best Pop Song.”

Dalal’s passion for acting, singing and modeling began in Austria. A certified musical and artistic prodigy, she learned to play both the violin and piano by age four and started composing her own scores at age five. At age nine, she attended the Mozarteum Master Class Chamber days in Oberschuetzen, Austria and later toured with the Leoben Musical Orchestra through Austria and Germany during the summer months of 1999 till 2004.

Before long, Dalal’s penchant for the stage came to rival her musical ability. After winning the Austrian Actor’s Award as a child, for her performance in a stage production of Bedknobs and Broomsticks, Dalal was accepted into the prestigious Broadway Connection Performing Arts Academy in Vienna. She held lead roles in performances of Cats, Starlight Express, and Elisabeth, which were performed in Vienna, Munich and Berlin. Dalal graduated from Gymnasium (High School) Hartberg (Styria) and went on to study Musical Theatre, English Literature and Art History in Vienna. There she also started playing with the Vienna University Orchestra and began her work with the European Voices, with whom she performed at the United Nations and throughout Europe.  In addition, Dalal was a special guest soloist for the Vienna International Gospel Choir, and recorded a Christmas CD with the Vienna University Orchestra.

Equally passionate about working behind the camera, Dalal attended the SAE College for film, with a focus on 3D Animation, Visual Effects and Editing. During her studies she directed and edited videos for MTV, Sony BMG, and Soundpool TV. Dalal has worked as a visual effects artist for the Los Angeles based visual effects studio Mechnology on such hit series as “90210” and Disney’s “Sonny with a Chance.” She has since starred on television shows such as “Soko Donau”, “Tatort”, and “Spring Waltz,” and has appeared in various commercials, and feature films in Austria, Germany, Switzerland, Greece, and South Korea.

“A call to reinvention and finding your better self, the singer repeats the earworm phrase ‘I’m not a victim, I’m Superman,’ against a spiky guitar solo. Delivered with the conviction of a host of daring divas that came before her, you can’t help but believe the lady.” –   MTV Iggy

“…just the kind of anthem us ladies need!” – Gurl.com

Dalal is heavily involved in New York Fashion Week and has performed for the last couple years while also modeling for designers such as Timo Weiland. She has also performed at Couture Fashion week at the Waldorf Astoria. Dalal has been on the cover of Magazines all over the world; Dstripped Magazine in Canada and the United States, The Grazer in Austria, Monat in Austria and the Inspirational Woman Magazine in the United Kingdom. She was also a cover model for various Billboards in Austria and Germany. Dalal’s debut single “Taste the Night” reached #5 on the Breakout Billboard Dance Charts, #7 on the UK Club Charts, #8 on the UK Pop Charts, as well as #26 on the US Top 40 Charts. The Music Video gained over one million views and the song is currently being played at H&M, Banana Republic, GAP, and more.