Brooklyn-based hip hop artist EsZ (Erron’s Attic) melodically paints a story of a past relationship / lover who he prefers to call “MIA NIA” –  which is explained as ” MIA ” ( Missing In Action ), ” NIA” ( Name Is Anonymous ). One thing you cannot fail to mention when talking about EsZ, and even before you hear the lyrics, is the production. Again the track here is beautiful, bouncy and fresh.

EsZ is one of the smartest young emcee’s around. His rhymes are almost always metaphoric. They are so superior to really everyone else out there in the rap business. But despite how intricate and deep his rhymes are, he still comes off as just having fun. After hearing any one of his songs, you can tell EsZ both loves rapping, and respects his vocation to be a rapper. Something a lot of rappers forget to do.

In “MIA NIA”, EsZ intricately details every aspect of a past relationship in precise, sharp-witted, but lighthearted lyrics surrounded by a bubbling musical soundscape. EsZ provides an alternative to your usual braggadocio rapper. He is someone who can talk about his emotions and experiences, expressing them with conviction, no matter how bittersweet, without humiliating or demeaning lyrics.

EsZ is a rare emcee who not only flows well, but talks about so much, mostly in a positive way. He is a modern-day poet and philosopher who can command people’s attention with his silver-lined tongue. There isn’t much Hip-hop around that can beat “MIA NIA” in terms of simple tastiness, both in its lyrical execution and its beat production. No bling blinging, no violence, just good wholesome storytelling rap with some clever sharp-witted little twists.

I always appreciate EsZ’s projects because they are always well thought out and good efforts, unlike some other artists usual, pointless “flossin’ my ice” styles. 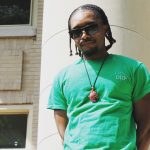