Mike Masch: “The New Amplifier” – the underlying focal point of his talent is the production!

The New Amplifier is the brand new album from rising Hip-hop producer Mike Masch. The media hype states that the album comes with a “complete collection of thunderous 808 bass, mesmerizing synths, hip-hop strings, powerful brass, smooth piano, guitar riffs, all guaranteed to amplify your night! With enlightening and inspirational wordplay, the album is a call to push for more, to be different, to be unique. To reach for higher!”

The question is, just how close did Mike Masch come to fulfilling those gargantuan artistic promises? And for those who don’t know, just who is Mike Masch to start with?

Mike Masch, from Ann Arbor, MI and is an American music producer-singer-songwriter. Growing up taking piano lessons at only 5 years old and listening to his dad’s classical music 8 tracks, he realized at an early age that music was a passion. It wasn’t until his teen years when those classical 8 tracks turned into a huge enjoyment for hip-hop music. After experiencing a variety of different musical genres while growing up in Michigan, Mike eventually furthered his education in music production and audio engineering, and began work as a DJ. His discovery of music production opened avenues for him, leading to the release of his debut album, and now this titanic 67 minute, 17-track follow up, entitled “The New Amplifier”.

Wow. That’s the first word that came to mind every time another track ended on this album. Mike Masch is a genius. It’s that simple. He does not fail at anything that he attempts here. This album is plain incredible. The lyrical content tells a great story. It’s not just another rapper singing about generic topics, ruining all sense of musical talent with autotune. It is a journey that Mike Masch walks you through, holding your hand the whole way. And when I say walk, I mean walk! Mike’s rapping style is unorthodox, steady and paced, going for dramatic vocal impact rather than fast technical raps alla TechN9ne, for example. It is obviously an acquired taste, and one that grows on you steadily track after track. From “Belief Revived” to the heartfelt “Now You Know”, or “Ready or Not” to “Rain Fury”, he gives you strong insight into his true inner feelings and thoughts. The amount of things Mike Masch succeeds with on with this record is very high, but the one underlying focal point of his talent is the production. It is what sets him apart from his colleagues and on par with many of his peers. Mike Masch is a through and through skilled music producer, blending a series of epic electronic soundscapes that most rappers would die for. The richness of the tones and the variation in moods make this a thrilling listen from start to finish. Mike Masch isn’t just some fly-by-night rapper making music for a buck. Much like Radiohead has done, Mike seems to want to push his music forward, busting out whole walls with just one melodic piano line, as on “Music Is Life”. My perception is that even if Mike dropped the rapping he has the potential to become a much sought after music producer in the game.

Mike Masch’s musical range and creativity with “The New Amplifier” is second to none. He does a great job of capturing the soul and moment in every song, by making you feel the emotion behind everything he is saying. In short, the album is brilliant. The rhymes are clever, the music is extremely rich, while the emotions are raw and the themes are totally epic. This album is musically pleasing, emotionally resonant, and entirely relevant. It is a very well composed musical journey, and one that you should absolutely follow!

J.Mally – “Now OR Never Ep” a melodic and creative flare that can be easy to appreciate 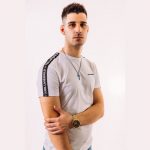 Giorgio Leone IT is a DJ and Producer, born in Italy and currently based Taiwan