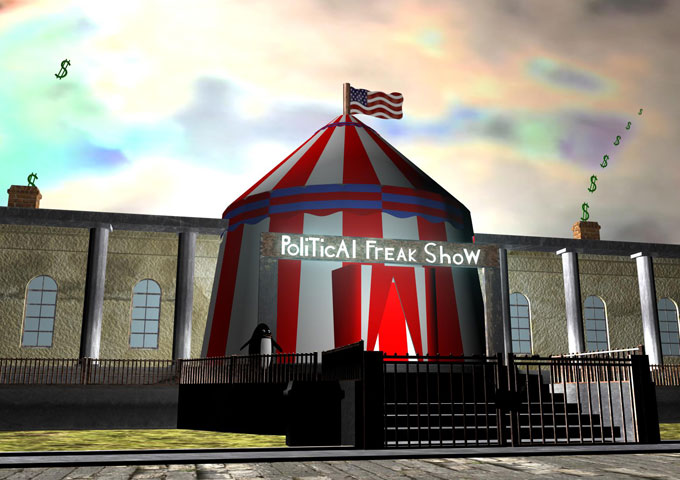 “Political Freak Show” is, at once, an artistic statement and a pure pop record. This release by Roger Cole & Paul Barrere is split between two musicians who have contrasting musical and vocal styles but have a knack for blending these styles into interesting and cohesive music creations. Here, the chemistry and talent reaches an apex and the result could turn out to be the duo’s best selling, most critically acclaimed recording so far.

While Roger Cole & Paul Barrere  started out releasing purely roots, blues, rock and progressive rock music, they have been inching themselves toward more alternative song craft as well as tackling more socially conscious themes. Here they hit their stride with a full frontal tongue-in-cheek political confrontation and a twisted art-rock sound to blow your seventies socks off!

Can there really be any doubt that this is Roger Cole & Paul Barrere’s most shimmering moment? Not only is this by far their most accessible sound, but it also has their highest concentration of excellent lyrics, harmonies and layered instrumentation. Their music is not to be taken lightly. Nearly all aspects of it are creative.

There are those who bemoan the apparent lack of sophistication in contemporary pop or rock music ( I’m one of them!), although there are some of examples proving that it’s not all about ‘dumbing down’ for the masses.

Roger Cole & Paul Barrere have demonstrated with “Political Freak Show” that it’s possible to write contemporary songs that have commercial appeal but, at the same time, possess the kind of harmonic depth that make them more than simple pop confections of the moment.

The track’s conceptual premise is a look to the culture – popular and political – the lyrics represent a departure for Roger Cole & Paul Barrere, and quite honestly, so does the music, while harmonically, “Political Freak Show” may be even more complex than anything they’ve done before.

The duo’s ability to create arrangements rich in texture but never cluttered, is in sharp contrast to most other artists in this genre, for whom the infinite possibilities of the studio result in “kitchen sink” recordings, where they throw ideas at a track, hoping some of them will work. Nothing ever sounds out of place on a Roger Cole & Paul Barrere record.

While there are many fine songwriters at work today, in the realm of popular song there are few writers who embody the spirit and soul of what Roger Cole & Paul Barrere are trying to achieve; honoring the creative rock tradition while bringing it forward into the 21st Century.