Northport N.Y. – M.C. Records is thrilled to welcome back The Queen of Blues/Rock guitar Joanna Connor to the label. Six String Stories will be released on August 26 and marks the Chicago guitarist’s first release in 14 years. Current shows are in Illinois, Michigan, Iowa and Oklahoma. She will be doing an east coast tour in October, scroll down for all her dates. It was about a year and a half ago that Joanna and her Les Paul became a YouTube sensation with millions of views around the world. You can view the 2:47 guitar shredding video that was recorded at the North Atlantic Blues Festival just click the photo.

Six String Stories is the one that the fans who pack her hometown gigs have been waiting for. You’ll still hear the scorching solos– but there’s more to Joanna Connor than that. The disc’s ten tracks include tastes of gospel, rock, soul and funk; all with the gutsy singing and heartfelt playing that have always been her trademarks.

Click the cover to check out the entire recording! 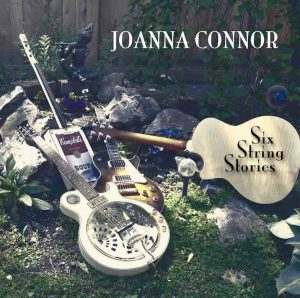 Joanna Connor might be the best—or most original—blues-based slide guitar player you’re likely to come across today. Or tomorrow. – Guitar World

Joanna Connor is celebrating 30 years of being in Chicago. Since her arrival she has toured in 25 countries and 49 states. Joanna was the first artist not on a major label to be signed to an endorsement deal by Gibson Guitars and Victoria Amps and has been featured in every major city newspaper and guitar magazine. Connor composed the soundtrack for Australian documentary “Being Dad,” and has shared stages with the likes of Jimmy Page, Los Lobos, Robert Cray, BB King, The Doobie Brothers, Kenny Wayne Sheppard, Son Seals, The Neville Bros and a host of others. Click here for her complete bio: http://www.joannaconnor.com/about_joanna/

Joanna Connor is a popular Chicago blues musician with the ability to pull off an absolutely face-melting guitar solo. – The Daily Mirror