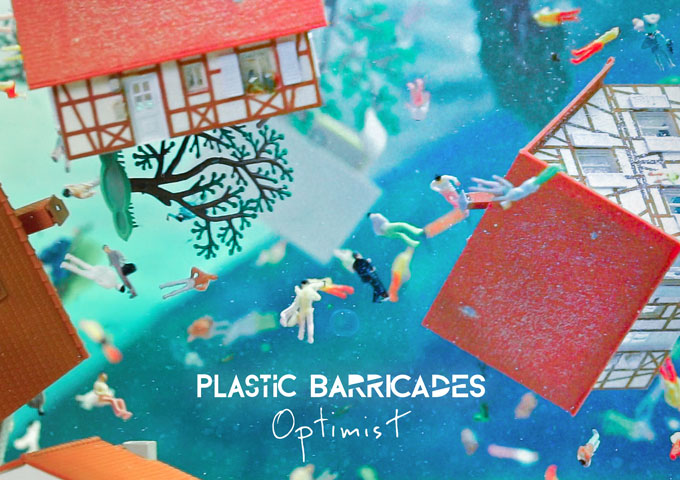 Based between London and Paris, Plastic Barricades are Dan Kert on guitars and vocals and Paul Love on drums. They have released “Optimist”, the second single from the upcoming LP “Self-Theories”. “The song is accompanied by a truly DIY music video, featuring 8 houses, 8 cars, plenty of glassware, some benches and trees, a crowd of exactly 300 cast members and around 20 buckets of water,” explains the duo. And if you find that slightly out of the ordinary, wait until you see the video clip created by PB art-director Elina Pasok. “Australia is on fire, the Amazon is burning, the seas are rising, air is polluted and dumps are full. But being pessimistic isn’t going to help,” state Plastic Barricades, continuing: “We can’t blame each other and point fingers. We have to make our own decisions.” Hence, the single “Optimist” is all about seeing the way forward, through what may seem like a hopeless situation.

Mixing jangly and crunchy guitars with pointed lyrics and compelling rhythms, the Plastic Barricades craft articulate, concise guitar-driven indie rock. By focusing on melody, the songs make for an accessible listen, but the additional songwriting and arranging touches are what keeps fans coming back for more.

Dan and Paul have a way of creating music that, at first glance, appears to be simple. The truth is, their music is deceptively littered with complex nuance. And “Optimist” is no exception to that rule.

Of course it goes without saying that Plastic Barricades create songs that are heartfelt and earnest, no matter how quirky or eclectic they may appear at first listen. Most of the music appears conventional on the surface of it all; Plastic Barricades have all the elements of a traditional indie rock band.

What makes the duo stand out from the rest of similar acts is the way that these positions interplay with one another. At play on “Optimist”, are lusciously expanding chords, constantly shifting beats, acutely conscious lyrics, and captivatingly airy melodies. The video clip brings yet another sensorial dynamic to that equation.

Right from the opening bars, we’re immersed in Plastic Barricades’ sonic world of “Optimist”. A dynamic beat somehow manages to pin the shimmery, floating voice of Dan Kert and the resonating guitars to the kaleidoscope we’re holding to our ears. Dan’s phrasing is unique – he has a distinct way of letting you feel he is seriously wrapped up a sentiment, without overwrought vocal histrionics.

In many ways, this is the subtlety of the duo as a whole, letting the audience unconsciously hum along to their songs while keeping them a bit off-stride with their sophisticated rhythms. You could easily strum and sing “Optimist” around the campfire, but never quite nail its tempo shifts in the manner of a Plastic Barricades performance.

This charming off-kilter indie rock track is laden with the acknowledgement and the importance of the elusive status of optimism in a chronically messed up world. Plastic Barricades’ music is effusive yet yearning, refreshing, exhilarating, and instantly approachable which rewards the listener with additional revelations upon each encounter.

“Optimist” was written, recorded and mixed in a backyard Shed Studio in North-West London and mastered by legendary Andy “Hippy” Baldwin at Metropolis Studios. The single dropped on the 2nd of February, while the LP release is expected this summer.