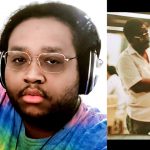 Winchester 7 & the Runners are focused on the future, but their latest single “My Super 8”, takes them nostalgically into the past. From the first jangly guitar-like notes and steadfast drumming, we get a hint that this track may not stray too far from its legendary indie rock predecessors.  It hearkens back to a time when guitars shimmered, and shoved throbbing bass and drum arrangements, supporting ear-catching melodies bouncing over the top. The song is so bright it’s practically glowing, with a simply layered arrangement that embraces both distortion and playful spontaneity.

Of the most surprising elements here, is the guitar part – which really is not a guitar at all, but a ukulele, brought into the mix by Georgia-based musician Winchester 7, who is accompanied in this project by the Runners, made up of Phil Voorhees (bass) who resides in Amsterdam, and Jack Kane (drums) who is itinerant in the UK.

Even though it’s sweetly melodic, “My Super 8” is serious in its construction. The melody and harmonies are incredibly tight, while the ukulele warps and bellows on cue, and the drums anchors everything into place. It all feels intentional, like a perfectly decorated room. There’s a lot going on in this song, but it never feel messy or out of place. Instead there is an immediate, undeniable energy to the track, which harnesses the catchy, elegant melody

“My Super 8” has a dreamy, lo-fi garage rock sound to it, and the way it prances and pounces toward its end will have you following, and grasping for more. It is a song bursting with tonal and timbral color, and an outright example of Winchester 7 & the Runners’ catchy composition style; a band with a ceaseless desire to keep fans on their toes.

Phil Voorhees provides a prominent bassline that sets the ambience of this equal parts indie and garage-sounding tune. Interspersed between Winchester 7’s wayfaring vocals are splashes of sound that borders on post-punk Britpop stylings. It’s a revitalized style of organic indie rock that takes no time to tune into, and once the wavelength between the ukulele and the guitar is established in your mind, it’s solid rock n’ roll business as usual.

The totality of the single, “My Super 8”, added to the self-made music video clip, is enough to engulf listeners in a myriad of textures accomplished via sound and vision. Winchester 7 & the Runners are not only dynamic songwriters and performers but keen videographers as well, constantly exploring new, diverse methods to keep eyes and ears glued.

A nostalgic look at the movie camera of the same name, “My Super 8”, retains all the clever wit and pragmatism that the Winchester 7 & the Runners’ music generally contains. The release showcases everything good about this band – delectable hooks and harmonies fleshed out with tangy and crunchy ukulele driven rhythms. It only takes a few notes to acclimatize yourself to their particular brand of indie rock. This track captured me from the first listen, and continues to grow on me with each new encounter.