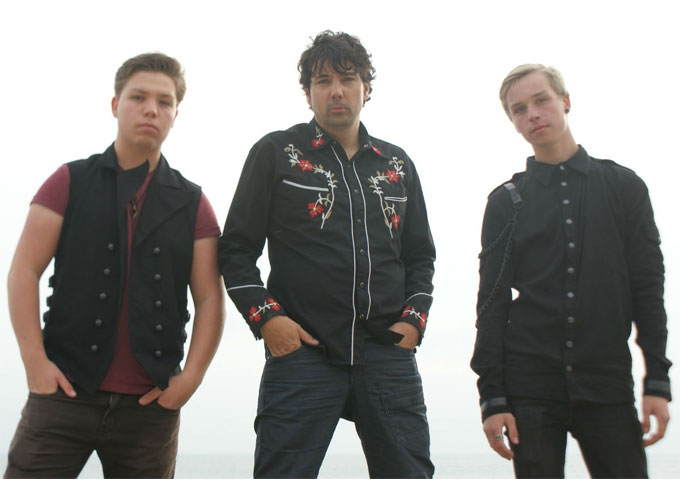 Valley Of Kings are a very soulful Rock band from the heartland of East Sussex, made up of frontman songwriter and producer Dar.Ra, Aiden Purdey and Rory Purdey, and recently witnessed that music still holds the power to reach people beyond words after creating music workshops in a Dementia care home in East Sussex recently.  It was surprising to see how the residents responded to hearing music and how it triggered off past memories which brought happiness and laughter to the residents.

Dar.Ra has graced the UK national charts and dance charts with two top 40’s and two number one dance records with acts signed to EMI, BMG, Festival Records (Australia) plus remixed legends like Frankie Goes to Hollywood, Tears 4 Fears, Urban Harmonix ft Rachel Brown (Faithless, Groove Armada) and many others along the way.  His first solo album Soul Hours released in 2010 made album of the week of Spain’s Heart FM as well as receiving support from BBC Radio, playing to over 1 million people on an air live show.

The Purdey brothers add soul to the unit, and they have a huge amount of musical DNA in their blood being related to the late great John Martyn OBE who had a 40 year career, and worked with some of the greats from Eric Clapton to Dave Gilmore.

The boys got the band together after finding out they loved the same records and began playing shows in the South East. They wrote an album in 6 months, booked into Neil Costello’s (Paul Macartney/Stevie Wonder) studio and recorded the whole thing in 8 hours. The boys wanted to go back to the way records were made back in the days of the one take and release it mode.

They recorded their debut EP Midnight and found something interesting happened when Dar.Ra was doing his music workshop in a Dementia care home.

Music has a natural power to go beyond words, people with dementia hold key memories which can be triggered by certain songs which can stimulate the mind, releasing endorphins which can lift a person’s spirit, when nothing else can.

‘While playing certain songs it’s an amazing thing to see someone go from staring into space to seeing a smile break out on their face, and suddenly they want to move their body and play along to the music, it is like witnessing magic happen’.

After playing a set of tracks one of the staff put on the Midnight Live EP, the response from the residents was to play along to it, while others where tapping their feet, which was the most wonderful experience to see, after all words had failed, but music made the difference.

The music industry has taken some near death blows since the internet and the Pop Idol shows and this has changed the way people respect music and musicians, so to see music being felt by people with no agendas restores any doubt in the power of music. It goes beyond chart success and back to the reason why music is so essential to the human soul.

The Valley of Kings create a hybrid of Rock, Soul, and Reggae, mixed with a high energy that makes the Live show well worth having a look at which you can do by coming down to Printers Playhouse Eastbourne where they will be headlining on the 16th Jan with support from up and coming mod influenced band The Gallery’s from Kent who recently supported Secret Affair.

CHECK OUT THE VIDEOS