Singer-songwriter, Roddan’s third and current release, “Don’t Be Troubled” is a follow-up to his 2017 EP, “Bleed 432”, and his 2016 Album, “Music House”. The recording features organic instrumentation, including guitar, piano, violin, cello, piano, and some great harmonies from Eliza Gilkyson. But it also carries the burden of a troubled time. “The year 2017 and the first few months of 2018 while writing these songs, was a troubled time for me to say the least,” explains Roddan, continuing: “All of the sudden, it seemed people and animal’s close to me were dying. In addition, an ex-girlfriend (a talented singer) whom I met and lived with in Nashville, committed suicide. And most recently, I came close to death myself, and went through a major surgery.” It’s worth pointing out at this point that despite Roddan’s recent troubled existence and his evident gravitation towards the melancholy, there is nothing in any way monochrome or depressing about his music.

Roddan tells his story in a meticulous format and makes the lyrics all the more important. He sentimental writing shows throughout the record, while juxtapositions are commonplace in a recording that is original, enticing, and mesmerizing to experience. All songs mesh together and aid in the overall emotional trek. The first song and title track, “Don’t Be Troubled” tells three different mini stories, according to the narrator.

The first tells of love lost and the regrets about things he’d wished he had said. The second about immortality, and the pain that comes with the inevitability of our mortality. The third tells of a woman who has the beautiful wedding, only to later realize that she doesn’t love the person she married.

The song fundamentally follows the narrator’s psychological observations of the events around him. Shifting perspectives allow listeners to observe the intimacy of the narrative Roddan so impeccably penned.

Eliza Gilkyson wraps us into the song’s wistfulness with a haunting and intoxicating backing vocal. “Judyann”, the second song is a tribute to Roddan’s mother who passed away as he was working on this record. He was able to find some recordings of her with her family, and added them to the end of the track.

The intricacies that make Roddan’s songwriting both pleasant and meaningful remain fully intact here. His ability to make a song sound intimate and personal, is only brought into a finer light with this track. He portrays love, loss, and heartbreak in a way that eschews oppressive morbidity.

No matter how fleshed-out the production is, every song finds its basic structure in the guitar. In this foundation, the album never forgets Roddan’s introspective, reserved manner, and he makes sure that he never loses sight of his own personal integrity.

The third song, “Leaving Today” is a duet with Eliza Gilkyson, which affronts the theme of a relationship beyond repair. As if the brilliant music composition and lyrics were not enough, Eliza and Roddan add a complete second and third dimension to the song with their complementary vocal styles, bring the complete package to the track.

The last song, “Can’t Feel A Thing – Live” features Roddan playing rhythm on a Gibson 12-string, while Rick Del Castillo plays lead on a six-string Taylor acoustic. Recorded live in Austin, TX, this is a stomping acoustic blues track about being ‘emotionally numb in a relationship’. This is a song with a strong upbeat vibe that sounds deceptively positive but it’s a grueling affair.

The two players set a powerful tone in an impeccable performance. The marriage here on a musical level, is inspired. As is true of all great songwriters who write from a personal place, to love Roddan’s music is to relate to him. “Don’t Be Troubled” successfully enhances and humbly strengthens the despair, passion, and sentiment in Roddan’s songwriting for this set. 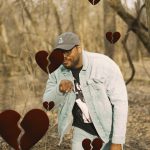