Sabotaj: “The 5 Elements” – The forgotten roots of Hip Hop 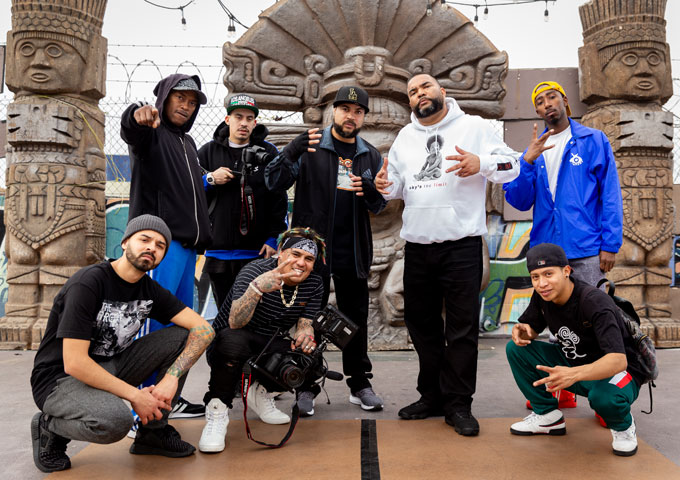 Leonard Fischer artistically known as Sabotaj, had his introduction to the world of hip hop during 1979, the same year Sugarhill Gang released its groundbreaking track “Rapper’s Delight”. Throughout the rough years of his upbringing in South Central Los Angeles, the rapper – whose parents divorced when he was just 3 – was brought up alongside his younger brother by his mom and grandmother. Despite any hardships and struggles, he always managed to find solace in hip-hop, especially via the radio station, KDAY and the radio deejay Greg Mack. Here Sabotaj discovered Eric B. & Rakim, KRS-One, Public Enemy, The Juice Crew and Biz Markie. Followed by West Coast artists such as Ice-T, Eazy-E, N.WA., King Tee, Tone Loc and several others. Eventually he would savor the works of Russell Simmons and Rick Rubin, as well the whole Def Jam era and its ensuing subsidiaries.

It was in 1988 that Sabotaj actually discovered his own talents. Invited to write verses for a house party, which he eventually ended up reciting, the reception to his performance convinced him that he could do the job.

He has never stopped writing since. After performing under diverse monikers he finally settled for Sabotaj, and went on to create an interesting and commercially tumultuous career which reads like an encyclopedia of the genre’s early stages.

Fact is Sabotaj is right back on track with his latest single, “The 5 Elements”.  The track is an ode to hip hop, and was taken off his album “The Legend That Never Was” – a project released in 2018 that was 30 years in the making.

“The 5 Elements” delivers verses about the core elements that helped shape the culture of Hip Hop – graffiti, breaking, deejaying, emceeing, and hip hop producing. The first thing that emerges from this track, is that Sabotaj takes Hip Hop more seriously than most other rappers I know of.

And here he directs much of his focus to reminding the youngsters about the forgotten roots of Hip Hop. This type of seriousness is probably why he is back on the mic with a brand new record, and to distinguish real Hip Hop from the shallowness that’s riding the airwaves currently.

For those who are frustrated with the imitativeness and childishness of much of modern day rap, this track is another breath of fresh air. Sabotaj is a master at timing the change in his flow, and with the drops in the beat, giving every bar a dramatic suspense where the listener knows a hard-hitting punchline is coming up.

The key to appreciating Sabotaj’s music in 2019, is understanding him, and this, his most recent release, is a good place to get an idea of where he is coming from. “The 5 Elements” is a dedication to the culture he has been representing for the majority of his life, hence expect high points, both musically and lyrically.

What exactly is hip-hop? Well if you summarize the words of Sabotaj, it’s a culture that you eat, drink and breathe – a far cry from today’s rappers who seem to only be looking for money, bitches and fame. Sabotaj just lets loose across the board on this track, relentlessly driving home his message of hip-hop revival, trying valiantly to shed some light on what hip-hop is truly about. And it’s a beautiful thing to witness!

A NOTE ABOUT THE VIDEO: The video was filmed in East Los Angeles and the Pico-Union area, capturing some of the greatest graffiti murals on the West Coast and some of the illest breaking scenes provided by The Legendary L.A. Breakers.