JannGotti – “Trust in You” radiates a bullish energy right from the start! 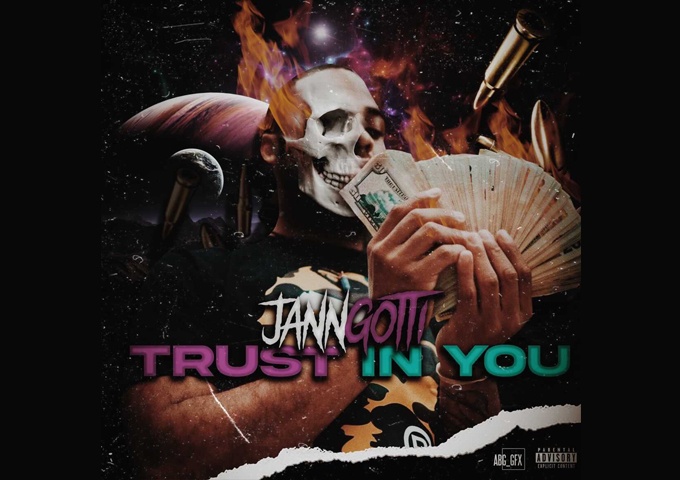 Current rap and hip-hop music gets often gets slammed for lazy rhymes, rapacious glorification of money and sex, and loud trunk-knocking beats that distract away from any lyrical substance. This is an overly harsh way to perceive hip hop in the 2021. JannGotti is a 23 year old independent artist from Philadelphia PA. He takes his influences to his own unique craft, and develops a sentient reflection of both him and his predecessors, while blending that with all the banging beats and melodic vibes of modern hip-hop. The result is a project that is big, bold and impacting.

The album “Trust in You” is 23 tracks long, and spans 1 hour and 6 minutes 90. Despite its intimidating length, there’s not a single moment that bores or drags, and everything seems to fit in its place. It’s a rare album that sounds great on first listen, and every listen afterward there’s something more to bite on thematically and sonically. The album radiates a bullish energy right from the start with “Intro” and “Perc” showing off JannGotti’s gritty voice and aggressive tone.

What makes JannGotti different enough to enrapture a listener from start to finish on this album is his lyrical and vocal abilities that feel authentically his. This is summed up no better than on tracks like “Won’t Make It”, “High” and “Speeding”, all tracks that combine catchy choruses with mesmeric delivery and emotive lyricism. Much of this project is extremely immersive to listen to.

There’s a lot to digest both lyrically and musically, while JannGotti is a captivating performer that warrants a closer ear. “Jets”, “Lemon Pepper Freestyle” and “Trench Baby” shows his prowess on slower head-nodding beats with deep soulful vibes running through them. Slow to mid-tempo beats is where JannGotti absolutely kills it, his voice and flow being well-suited to emotional resonance.

It’s a template he faithfully sticks to on “Not Alone” and “Keep Going”, and the results are expectedly stunning. JannGotti character is on full display throughout “Trust in You”, and each track comes together to create the vivid and compelling artist behind it all. Not to mention, the production across the board, which is superb and fits perfectly for whatever message the song is trying to communicate.

He picks up the pace on “Have It”, before sliding into another smooth groove on “No Parties Remix”, and then launching into the relentless bang of “Rio Flow”. It’s also hard to deny liking his moments of lyrical and sonic intimacy on tracks like “Cold Hearted”, “Easy Ways”, “Cashed Out” and “Fastest Route”. By this point JannGotti is worthy of not just admiration but respect and consideration as a serious contender in the underground rap conversation.

“Locked In”, “Love Me Again” and “The Race”, continues to showcase JannGotti’s versatility, as he weaves mesmerizing raps, moving from melodic to lyrical flows with effortless ease. Moreover, the album doesn’t lose momentum or tail off with weaker track.

The final 3 cuts, “Jugg&Finesse”, “Chosen One”, and “Abused Thoughts”, offer the highly accomplished, lavishly polished production, and persistently intelligent rapping, as can be found on the opening tracks.

This incredibly cohesive album is a compelling snapshot of an artist at the peak of his powers and on the cusp of bigger and better things. “Trust in You” is not just a massive album. It is a full-fledged artistic statement.