Snir Yamin: “Down The Line” – play it twice, and you’re done, hooked!

Hailing from Israel, Snir Yamin is a singer and songwriter with a personal and eclectic approach to his music. His songs bridge the gaps between the intimacy of folk, the appeal of pop and the energy of rock. Snir started his music career in 2006, after losing his father in a car accident. Between the years of 2009-2015, Snir performed across Israel, Europe and North America. In 2013 his debut EP, entitled “Urban Stories”, sold over then 50,000 digital copies via Amazon and iTunes. Now he is back with a brand new single, “Down The Line”, released just a few days ago. By nature of its construction this latest song set up a real challenge for Yamin as he decides how to continue building his aesthetic.

The track’s layered production quality and alternative rock elements feel like the kind of thing that can’t be repeated without feeling old-hat really quickly. Instead Snir Yamin’s will to write a pure, simple, and strong song, showcases his ability to bolster his core songwriting techniques with any amount of instrumentation.

Throughout the record, you can hear the heart of the song clearly, while the elevated production and musical arrangement massively enhances what already stands as a compelling track without all the embellishments. “Down The Line” shows that Snir Yamin can pull off bombastic and high-energy choruses, as well as ultra-distilled, minimally arranged verses.

Now, as is the case with many artists I love, Yamin contentedly writes the music he wants to write, and more than happily thrives off of a devoted fan base. He largely discards the austere, melodramatic singer-songwriter shtick in favor of a lush, cinematic canvas upon which he reliably spins his literate, melodic, alternative rock.

But regardless of his sonic choices, it’s Yamin’s dense narratives of the human heart which captivate. The emotion that he can evoke is enrapturing. Painted by an enveloping sound, his perceptive words speak boundless personal prophecies driven to a euphoric state: “Rooftop views and glory / Fake smiles keep me going down the line, down the line / So-called friends keep watching me / They want me to lose my sanity down the line, down the line.”

Snir Yamin is a modern-day poet. His lyrics are thoughtful and the music is beautifully entangling, while the track has a thematic strength that’s rare these days. Yamin’s immaculate conception of songwriting understands just how to set a perfect tonality and depth for the story-line. He also has an exceptional gift for coming up with catchy melody that doesn’t leave your head for days. On “Down The Line”, Yamin creates a landscape of powerful storytelling and moving sentiments.

If you are a fan of Snir Yamin previous releases then you will love this new track. It stands with the very best work he has done. If you’re new to the Yamin experience, then this is a place as good as any other to start appreciating his craft. Nowadays we are void of music with substance. Listen to the lyrics here, the intensity of his voice, and the dynamics of the music. Grab “Down The Line” now, play it twice, and you’re done, hooked! 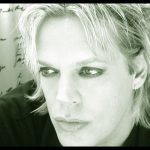