Monjyoti Bhattacharyya known by his stage name, Monjyoti, released his second official single “Neighbor Syndrome”, taken from his upcoming album, “Hypnosis”, recorded in collaboration with music producer Papu Gogoi. I don’t even need to hear the rest of the album. This single is simply a dexterous, dynamic and sublime smorgasbord of instrumentation and lyrical canny, on a level I’ve not heard in a long time. Music can’t always be this good because we would have nothing by which to benchmark its ingenuity. There are sections that are nice mellow journeys to somewhere else and there are downright monstrous sections that make you think everything you know is about to explode. Monjyoti’s music is reminiscent of the great Progressive Rock bands of the 1970s, but he is able to move beyond the genre and make something more modern, more experimental, and all his own, out of it. If Monjyoti doesn’t deserve some attention from “Neighbor Syndrome”, I don’t know what does. There’s a modern sheen here, and perhaps a heavier, darker one.

There’s something very haunting about this record; I wish I could put my finger on it but I can’t. Though the track is meticulously structured, Monjyoti approach is open and abstract. The overall mood, in fact, is one of exploration, in my opinion – exploration of the human soul and the world with which the individual psyche must grapple.

From the absolutely gorgeous and achingly beautiful harmonies and melody, to the orchestrated strings, and the fiery guitar work by Writuraj Gogoi, this is simply a masterpiece. Monjyoti really puts so much care and effort into every aspect of an album and it really, really shows.

There isn’t any waste of music on this work, each note is a perfect fit. Monjyoti is one of the authentic artists on the music scene. He doesn’t just think about the music, he thinks about the presentation. He thinks how you will feel every second of the song, and he really captures every nuance of his musical and lyrical intentions on record.

Beautiful, unsettling, uplifting and powerful, frequently at the same time, “Neighbor Syndrome” will mesmerize you. It comes as a real breath of rarefied air that demands your full attention and repeated listens, in order to uncover all it has to offer.

Playing this track on a great system reveals the magic that Papu Gogoi ( Music Producer), Diganta Bordoloi (Mixing & Mastering) and Ripu Mohan (Recording) performs on this mix, with the soundscape coming at you from both inside and outside the circle of speakers. All the musical layers, different atmospheres and the lush arrangement serves one single purpose – to simply amaze its listeners. The powerful and pristine vocals by Monjyoti, does the rest.

Whether or not you are a fan of Monjyoti’s work or someone who hasn’t heard anything from him before, I highly, highly suggest you grab this single. If you are a progressive rock fan who is feeling something of a gap which you’d like to fill, then this record is for you. This is the best independent progressive and/or experimental rock single release of 2019. Period. 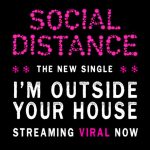