After hanging behind the scenes for the last couple of years and remixing artists like “The Love Theme, Short Wave Craft & “Disco Circus”, Bad Bikini release their Disco infused debut single “Free” on the Smokersblend record label, run by producer Dominic Owen (The Love Theme). There are a combination of sounds on this track but the overall feel is electronic disco. There are also plenty of moments for Bad Bikini to show an almost chill wave undertone – the spectral chords and tuneful flutes flourishing beautifully above the driving rhythm. The female harmonies keep the smoothness bumping, while a male voice hollers: “Don’t speak to me about the land of the land of the free and the home of brave, until everybody’s free.”

The handclaps and glittering filtered chorus is incessantly catchy. The track’s somewhat playful structure, which switches quickly from cool gentle breaks to four on the floor grooves, speaks very much to Bad Bikini’s style. The song is refreshingly free of cynicism, which of course doesn’t preclude it from being the big breakthrough track it sounds like it could be.

“Free” is a chunky rhythmic electro party – thick bass, hi-hats and vocal samples creating a tight track that melds into a disco riffing celebration.  It’s a snappy and sassy party track full of polished melody and assertive instrumentation that sounds like a glammed-up modern disco take on its golden era. The sparkly, shimmery synths and wobbly bass recalling the ecstatic heights of that time.

Bad Bikini adds a blissful alternative to many of today’s aggressively maximal radio-friendly dance tracks. Despite grabbing hints from the past, the song sounds beautifully wistful, uncluttered and ever-present.

In the summer of 2020, if you had only one dance tune to soundtrack your adventures through day and night, you could do a lot worse than Bad Bikini’s tune “Free”. With a gloriously upbeat vibe and a joyful bass-loving rhythm, you could put this track on infinite repeat and still dance to it on the hundredth listen. The Bad Bikini project has made a potential hit that you can play at any party in the world and start a riot.

“Free” was entirely worth the wait, and it is the perfect introduction to this fantastic dance project, who will not remain behind the scenes, and in the dark for much longer. That is for certain. Bad Bikini bring retro without rust – a fresh vibe and fresh sound to the dance-floor, and you’ll be worse off missing out. “Free” is a modern-day disco masterpiece that probably puts the producers in league with their heroes.

ZEE – “Bye Bye Blackbird” is in memory of his loving brother 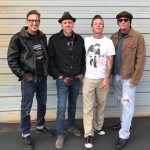 Coming out on on indie label Shield of Love, “Inside Out” by Jackslacks