Released Aug 28th, “Go Missing” Prod. by Marshall Artz Productionz, is the producer’s 3rd single release since June. The track will be featured on his upcoming 2021, self-titled LP “Marshall Artz Experiment”. The song features singer-songwriter SeanQ, from Dallas, Texas. The producer’s blend of R&B-inspired neo-soul and smooth chill sounds becomes its own entity within the hip-hop and urban music world. Marshall Artz Productionz work should gain high appraisal through its colorful and subtly amped vibes that play to any genre lover’s ears alike. After listening to this track, I expect that the outpouring of demand for more of the producer’s entrancing and vivid production will be growing more intense as time has gone by.

From the get-go, there’s no disguising that you’ve entered the world of a thoughtful and creative producer. Whether it’s through meticulously looped keyboard chords and spacey filtering that slips into commanding drum claps, or the poignantly succinct bass lines that pour emotion into the sultriness, Marshall Artz Productionz’s ability to draw the listener into his grooves are unparalleled.

His skills are also highlighted in his ability to create a complimentary soundscape for a superbly gifted singer-songwriter like SeanQ, who has a unique voice that most producers fail to elevate. Such is SeanQ’s voice that the rich and blissful vocal tones, as well as the sentiment of the track can lift its listener from even the most impassive states.

Certifying himself as a serious contender in contemporary sounds, the warm, nestling and finely textured audio of “Go Missing”, makes for a tantalizing listen. The track is a creative and diverse groove that can make for a great listen in almost any context with its combination of smooth accessibility and soulful vocals.

Marshall Artz Productionz’s has used the magic of electronic sounds to make “Go Missing”, an eclectic effort that easily blends elements of Hip-hop, R&B, Soul, Pop, and even Chill, among a plethora of other influences. The result is an artful and warm track that can exist equally as late-night club music and good sounds to vibe to in the background at home.

At the surface level, “Go Missing” is accessible enough that casual music listeners can easily be drawn into its captivating elements. It’s really smooth and straight-forward for the most part. At the same time, it is complex and creative enough for a lot of music nerds who can easily find something to take away from it technically.

“Go Missing” is incredibly hypnotic, with crystal-clear production and a ton of background elements adding multiple layers of complexity to the track. None of which are invasive enough to dissuade casual listeners while they savor the addicting vocal and melody. It’s really brilliant, to be honest.

“Go Missing” Prod. by Marshall Artz Productionz, and featuring SeanQ, is catchy and interesting enough, to warrant a ton of playbacks, and if you’re anything like me when you hear it, you’ll find yourself going back to this song over and over again. Be sure to give this a spin if you’re in the mood for good vibes in just about any context. 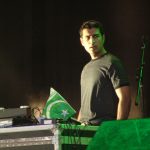