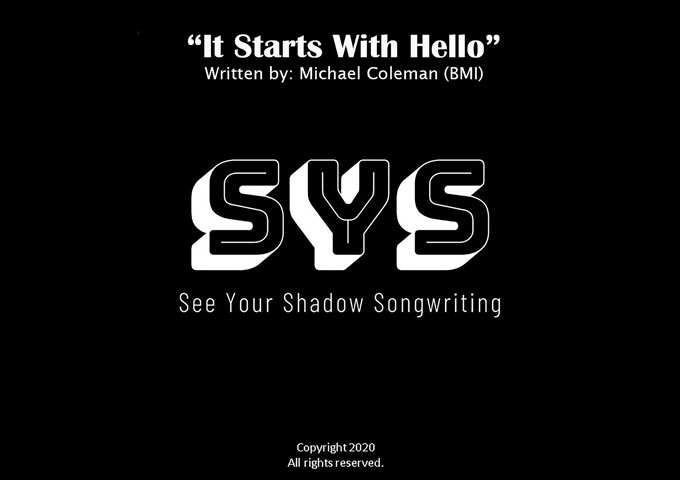 The Country to multi-genre collective See Your Shadow Songwriting have recently added another new song to their already impressive discography, returning with the fresh and inspired “It Starts With Hello”. The hard-working unit from have a lot of success to look back on, but they continue to suggest, through their songs that they are very much looking towards the future as they deliver another incredibly catchy, uplifting and inspiring country-slash-pop-slash-rock record. To continue to evolve while not straying too far from an original sound is one of the most vital skills to have in the music world and See Your Shadow Songwriting once again show they are more than capable of this with their latest single.

The male lead vocal is in-form as he switches effortlessly from powerful, deep tones to higher, more delicate pitches and back again. The instrumental side of things is equally as tight and controlled as each song is complemented by the instruments which never drown or understate the vocals. See Your Shadow show off their Country-Pop side that is perfect for the mainstream airwaves while maintaining an underlying classic, pure country edge.

Aside from the infectious music and captivating vocals, the key focus of “It Starts With Hello” is without doubt found in the lyrics, and what inspired this song.  “As a lot of the work we do is about what I call the human experience,” explained Michael Coleman, “it came to me that every interaction we have with anyone anywhere in the world starts when we say hello to them, and it is when we interact with different types of people from different cultures, different political beliefs, different socio-economic backgrounds, different sexual orientations, and the like, that one word, hello, is what kicks off our ability to engage, learn and grow.  It sets the stage for everything.”

“With last summer being one of the worst summers in our history,” continued Michael Coleman, “the pandemic and all the social unrest taking place all over the world, just really demonstrated how much talking we need to do and now with us being able to socialize again, I wanted to have See Your Shadow kick off the See Your Shadow Summer of Diversity and Inclusion, with this song as our backdrop,” he concluded. Listening to the song, it becomes clear that he may have totally succeeded in doing just that.

See Your Shadow Songwriting have always had a little bit of everything up their sleeve, and each of their hits show it, from the soaring vocals, to the spirited instrumentals, the genre fluid compositions and production, as well as the meaningful lyrics. There’s a reason this cohesive musical unit continues to put out ear-catching and heartwarming tunes. See Your Shadow Songwriting have always made carefully crafted soundscapes that know no bounds in finding a target audience.